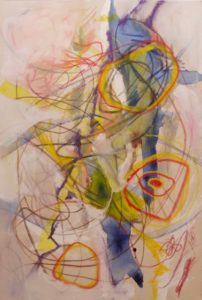 Deltra Powney is an emerging studio based visual artist who’s artwork contributes to the discourse surrounding environmental/human relationships. Originally from Saskatchewan she moved to Alberta to attend Medicine Hat College where she obtained a Visual Communication Diploma and worked as a production artist and designer. Recently she graduated from the University of Alberta with a Bachelor of Fine Arts and Design with distinction focusing on painting and printmaking.

While studying under Professor Maralene Oliver of the Art and Design printmaking department, Professor Natalie Loveless of the Art History department, and Paul Bernhardt of the painting department, Deltra discovered the value in having a sense of place. Human/environmental relationships, responsibility, and care became an intense area of research while taking a class focused on the Anthroprocene during the last year of her undergraduate studio studies. These concepts were explored through personal history, memories and place.

The paintings presented in this show are the result of the partnership between a mother and her eight year old son. Deltra and Corwyn Powney created works that are a visual representation of discussions that consider memory, spirituality, place, and connectivity as possible concepts that constitute maps. While combining thoughts and working intuitively they reacted to each other’s ideas, gestures and colour choices, brushing paint into patterns that look like plants, roads, paths, bridges or other marks that are suggestive of something familiar.