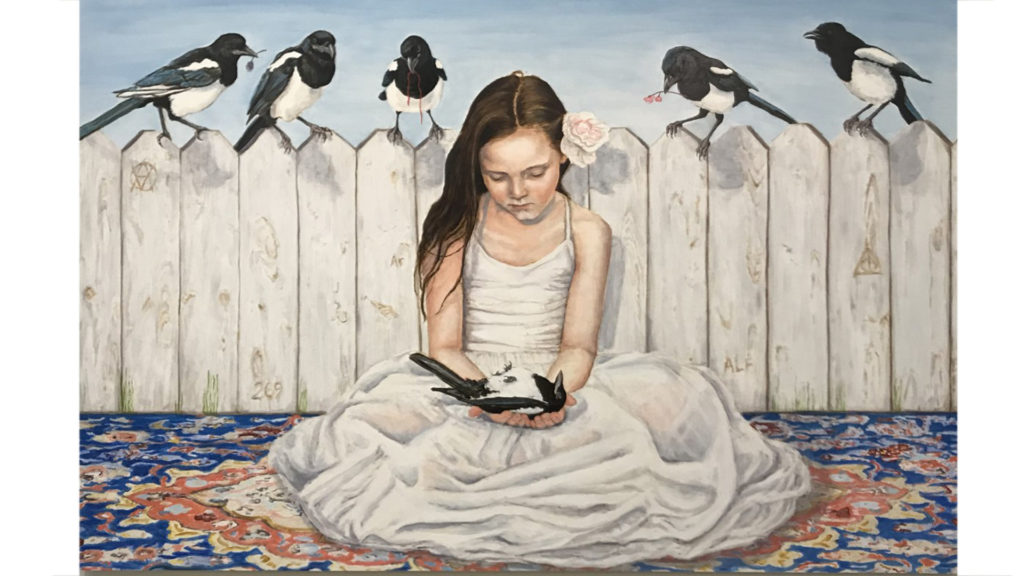 Edmonton artist Cynthia Fuhrer explores the deep-rooted and inextricable connection that exists between human and animal-kind. These captivating portraits began with a sensitive yet formal portrayal of the artist’s daughter. Fuhrer added an array of fungi to the ethereal dress she wears in the composition, creating a discourse around new technologies in biotechnology procured from fungi.

As the series became, an array of uncanny fauna appeared alongside the artist’s children. They share the frame in stunning yet quiet scenes that oscillate between dreams and mythical wonderlands. The creatures manifest as albino versions of the beings we know from our own wilderness; bison, moose, deer and more. Albino animals are prized by hunters and, in some cultures, seen as bad luck or omens. Fuhrer selected mainly native Canadian creatures to further the viewer’s association to these beasts and urge contemplation around the sentience and value of all animal life.

Children become the protectors of the creatures that dwell in these paintings, in a similar way to the movement of younger generations who share a growing inclination towards green living, environmentalism, vegetarianism and conservation. Fuhrer prompts us to celebrate the magic in nature, willing us to protect and treasure it, rather than seek it out to destroy it.